The Competition | The Jean Pictet Competition is one of the oldest and best-known competitions in the field of International Humanitarian Law (IHL). The competition is a unique training in international law for students whose objective is to take the law out of the books. In a first phase, the nearly fifty selected teams, usually stemming from five continents, receive a remote training in IHL from the organizers of the competition. At the same time, the University of Basel team receives training from Prof. Petrig and Mr. Onur Dur during the entire preparation phase, which lasts from the beginning of the fall term until shortly before the competition, which takes place in spring. In a second phase, all teams meet for one week to compete against each other; the place of the competition changes every year. The selected teams compete in the context of simulations and role-plays built around a fictitious armed conflict. Teams play the role of actors of armed conflicts (e.g., members of the armed forces, legal advisers of governments, NGO workers) and are constantly assessed by a jury and supported by a tutor. For more information, please visit: www.concourspictet.org

Selection of the University of Basel team | The team of the University of Basel is composed of 3 students; they are selected by Prof. Petrig based on a written application in English and/or French (motivation letter of 1 page and CV of maximum 2 pages) and a short interview in English and/or French. Information about the internal selection process is provided during the information session, which is taking place at the beginning of the fall term and is announced separately. Please do not apply before having attended the information session.

Grading | All tests and simulations completed during the Competition are oral; the Competition has no written part (except for the application file). Therefore, the competition is graded on a pass/fail basis at the University of Basel: if the team is selected for the Competition and attends it, the three students receive a “pass” for the course and are awarded 12 ECTS credit points.

Prior knowledge | Team members should have successfully completed the course “Völker- und Europarecht” at the University of Basel (or an equivalent introduction into public international law at another institution or university). It is highly recommended that team members attend the course “Humanitäres Völkerrecht” at the University of Basel in parallel to the preparation for the Competition, unless they have already completed an introductory course into IHL at a different institution or university. 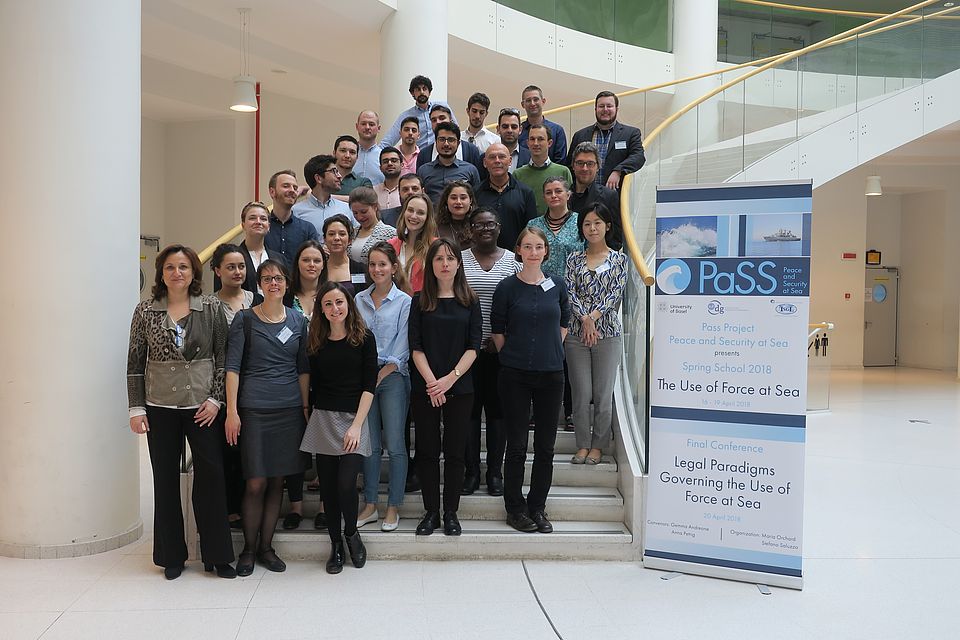 Topic of the PaSS Spring School | The use of force is a core issue of international law. The Spring School on Peace and Security brings to the forefront the issue of use of force at sea specifically. The broad approach taken considers the use of force by individuals and States, and as part of law enforcement operations and conduct of hostilities. It is necessary to discuss the use of force at sea specifically for two reasons. First, the bulk of legal instruments and related writings pertain to the use of force at land; hence, it must be assessed from a legal and operational perspective whether and how they apply in the maritime context. Second, a series of factual and operational developments – new scenarios, new actors and new at-sea technologies – necessitate an analysis of the use of force in the context of the maritime environment. In terms of ‘scenarios’, situations are multiplying where it is unclear whether force is used within the framework of law enforcement operations or rather as part of conduct of hostilities (e. g. when coastguards and other civilian-manned vessels in various parts of the world’s oceans carry out military rather than constabulary functions). As a consequence, it is ambiguous whether a law enforcement paradigm reigns or the more permissive law of armed conflicts is the defining approach to the use of force. In terms of ‘actors’, the increased use of and reliance on private actors to prevent criminal offences at sea (e. g. to protect offshore installations or to prevent piracy attacks) and even to enforce the law (e. g. fisheries laws) can be witnessed; this necessitates an assessment of their respective powers. Finally, ‘at-sea technologies’ remove the need for a direct encounter or physical presence in the display of force. Such technology is being used not only to respond to maritime security threats (e.g. the use of unmanned autonomous maritime systems) but also as a means of creating such threats in the first place (e.g. cyber attacks).

Format and participants | The PaSS Spring School took place in Turin from Monday, 16 April 2018 – Thursday, 19 April 2018; the student body was composed of participants from all over the world bringing with them a multitude of academic and professional experiences. On Friday, 20 April 2018 the Spring School was closed with an international conference on the “Legal Paradigms Governing the Use of Force at Sea”.